skip to main | skip to sidebar

This coming Saturday is our 2nd MSF (Monthly Sankirtan Festival) for 2013 and it’s a special one! You may ask why? well... because its theappearance day of the most merciful Lord Nitai!

Lord Nityananda who is none other than Lord Balaram. He appeared over 500 years ago to assist Lord Caitanya in flooding the hearts of many materialistic souls with the Love of Krishna! In the spirit of Lord Nityananda, we will reach out to everyone and anyone on the streets of Toronto and share with them this wonderful message of Krishna Consciousness!
It will be a day of festivities, beginning with mangal aarti and an ecstatic morning program, followed by MSF and a grand evening program. Please come for as long as you can. We look forward to celebrating this most glorious day with you!
Schedule:-
4:30 am - Mangal Aarti followed by complete morning program
7:30 am - Special Bhagavatam Class by Apurva Prabhu
9:30 am - Building the mood
11:00am-2:00 pm - Sankirtan Festival
2:30 pm - Sharing Nectar Stories with Lunch Prasadam
6:00 pm onwards - Evening Program details at http://iskcontoronto.blogspot.ca/2013/02/celebrate-lord-nityanandas-appearance.html
In your service,
Toronto Sankirtan Organizing Team
O Lord Caitanya, kindly offer me shelter at Lord Nityananda's Lotus feet. I am able to sing about the pastimes of Lord Caitanya because of my love for  Lord Nityananda. Lord Nityananda knows no other designation than being Lord Caitanya's servant. Only through serving Lord Nityananda is one eligible to become a devotee of Lord Caitanya. As by Lord Nityananda's grace one can know Lord Caitanya in truth, similarly to fully comprehend the truth about devotional service one must receive the blessings of Lord Nityananda. Lord Nityananda is very dear to all the devotees. Everyone can receive from Lord Nityananda entry into the path of devotional service. But if someone disregards Lord Nityananda, Lord Caitanya condemns him to eternal suffering.
Caitanya Bhagavat
Posted by Shyama-Mohini at 2:41 PM 1 comment:

Gearing Up for the Weekend

This coming Saturday is our 2nd MSF for 2013 and its a special one! You may ask why? well... because its the appearance day of the most merciful Lord Nitai!
More details to follow soon, but here's an article from ISKCON News from 2011 that gives us a glimpse into the un-ending compassion of Nityananda Prabhu
Nityananda Prabhu: The Embodiment of Compassion

See you Saturday?
Posted by Shyama-Mohini at 7:12 AM No comments:

As we come closer to the second MSF of 2013, which will be celebrated as Lord Nityananda's Special MSF on February 23rd 2013, here's a crash course for you with the best Book Distribution Tips from none other than H.G. Vaisesika prabhu.

Posted by Shyama-Mohini at 4:55 PM No comments:

Sankirtan is Fun And Easy!

Posted by Shyama-Mohini at 2:35 PM No comments:

Our apologies for missing in action on our blog for almost a month! No we haven't been hibernating...there's been lots going on! We smashed our target for 2012 on the most celebrated boxing day! We had our 4th Annual Devotee Appreciation Day, our 1st MSF of 2013 and lots of planning for the year ahead! Stay tuned for some updates from the last month. Here's a glimpse in to the magical moment from Prabhupada Marathon 2012, right after we met our target at Yonge and Dundas Square on Dec 26th!

It was one of the coldest days of the year so far, but as has been a tradition, devotees headed out at 6:30am to catch the early shoppers and stayed on till about 4:00pm when we met our target. There was constant kirtan for the entire duration we were out and many many devotees came by to participate throughout the day. At the end of the day, we had distributed about 350 books on the street. from the Toronto Sankirtan Adventures Diary

Posted by Shyama-Mohini at 2:34 PM No comments:

For those whose lives have been forever improved by meeting Lord Krishna personally in the pages of the Gita, Gita Jayanti is not only a day of celebration but also a chance to express their gratitude. And the best way to do so is to share the Gita with others. Krishna Himself says, “There is no servant in this world more dear to Me than he, nor will there ever be one more dear.” (Bg. 18.69)
The Gita teaches the essence of spiritual knowledge, purely and succinctly, in a way that anyone – in any situation of life – can practically apply its instruction and wisdom. And since Krishna, the Supreme Personality of Godhead, resides within the heart of every living being, He is always there to help the reader understand the Gita’s profound message.
Many people in the world are innocent; and when they hear the message of the Gita from a devotee, they at once embrace it and attain perfection.
Krishna says, “Again there are those who, although not conversant in spiritual knowledge, begin to worship the Supreme Person upon hearing about Him from others. Because of their tendency to hear from authorities, they also transcend the path of birth and death.” (Bg. 13.26)
More than ever before, people need the common sense and elegance of the Gita. Why? The modern media daily brings us foul rumors, incendiary disputes, and scenes of massacre. And a popular scientist has proclaimed, “The human race is just chemical scum on a moderate sized planet . . .” (Stephen Hawking, interview 1994).
It seems that the public demands these things—at least some studies suggest that they do. And news anchors across the world have come to count on the fact that people have developed an insatiable appetite for calumny and the gory details of tragic events.
As people disclose the acrimony and conflict that trouble their hearts in tens of millions of daily blogs, YouTube clips, Facebook postings, and interviews in the 24-hour news cycle, the resultant din is a toxic outpouring of malignant sound that flows into the ears of the innocent masses, leading the world’s population into anxiety, despair, and mental illness.
The delicate human ear requires Krishna’s soothing voice in the Gita to clarify the heart and fortify the intellect.
Even five thousand years after Lord Krishna’s departure from this world, “the Bhagavad-gita can be consulted in all critical times, not only for solace from all kinds of mental agonies, but also for the way out of great entanglements which may embarrass one in some critical hour.” (SB 1.15.27, purport)
Lord Caitanya exalts the Gita to Srila Sanatana Gosvami: “Kåñëa is so merciful that simply by aiming His instructions at Arjuna, He has given protection to the whole world.” (Cc Madhya 22.56)
The Gita issues from the beautiful lotus mouth of Lord Sri Krishna, our best friend and eternal benefactor. And as that message passes through the pen of Krsna’s empowered representative, Srila A.C. Bhaktivedanta Swami Prabhupada, the Bhagavad-gita “As It Is” becomes all the more relishable.
As Gita Jayanti approaches, please read the Gita, remember the Gita, give the Gita.
Humbly in service,
Vaisesika Dasa
Posted by Shyama-Mohini at 9:06 PM No comments:

Guess Whose Coming to Town?

The much awaited weekend is here, the icing on the “Marathon Cake” – His Grace Vaisesika Prabhu and Her Grace Nirakula Mataji arrive on Thursday! An exciting extended weekend has been arranged for your transcendental pleasure and inspiration!
If you've been to any of these events before, you surely need no convincing; and if you have not, then you really don’t know what you're missing! Check out the detailed schedule below, and mark off the dates! Make the most of this amazing weekend, come and drown into the ocean of bliss…as much as you can! 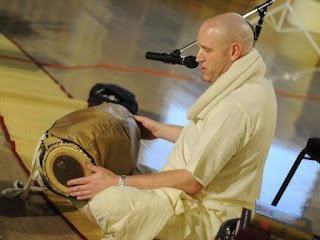 Detailed Schedule
Special 4-part Srimad Bhagavatam Classes (Fri Dec 14th to Mon Dec 17th, 7:30 to 9:00 am): “Books are the Basis - Meeting Krishna Through Srila Prabhupada's Books”
“By regular attendance in classes on the Bhāgavatam and by rendering of service to the pure devotee, all that is troublesome to the heart is almost completely destroyed, and loving service unto the Personality of Godhead, who is praised with transcendental songs, is established as an irrevocable fact.” Srimad Bhagavatam 1.2.18
Come to inspire and be inspired, learn how to do “Sastra-deity worship”, develop strong personal sadhana through reading and distributing Srila Prabhupada's Books

Friday Evening Seminar (Dec 14th, 6:30 – 9:00 pm) on Top 6 Techniques to Fast Track your Krishna Conscious ‘Career’
Where do you see your Krishna Consciousness in 5, 10…25 years? What did that senior devotee do right? How to maintain and grow your KC with increasing responsibilities in life (family/job/health)? Come to find out answers to these questions from the ancient yoga texts!

Saturday Street Sankirtan Festival (Dec 15th, Noon – 4:00pm)
A rare chance to head out with Vaisesika Prabhu and share this beautiful gift of Krishna Consciousness with people of Toronto! Highlight is the sharing of the nectar stories with everyone over sumptuous lunch prasadam in the temple! 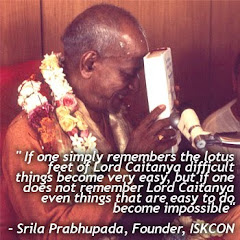 Created in May 2009, under the inspiration of Vaisesika Prabhu, the Toronto Sankirtan Team organizes regular Monthly Sankirtan Festivals to encourage devotees to go out as a group to share the precious gems from the spiritual world - the books written by Srila Prabhupada!